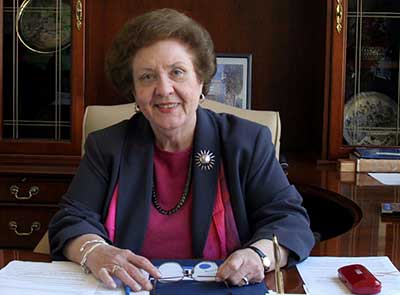 M. Louise Fitzpatrick, EdD, RN, FAAN, who passed away peacefully at her home on September 1, 2017.
Dr. Fitzpatrick’s association with Nurses Educational Funds, Inc. is longstanding, dating back to 1970 when she was awarded NEF’s Isabel Hampton Robb Scholarship while studying for her doctoral degree in nursing education at Columbia University Teacher’s College.

Louise served as the Dean of the College of Nursing at Villanova since 1978 and formerly was faculty at Columbia University where she taught public health nursing to masters students and prepared doctoral students in curriculum development and historical research.

She was an alumna of the Johns Hopkins School of Nursing, the Catholic University of America and Columbia University and holds a certificate in higher education management from Harvard. She was a fellow of the American Academy of Nursing; and has served on numerous professional associations and health agency boards as well as accreditation commissions. She received awards from all her alma maters, the Pennsylvania Nurses Association’s Global Citizen Award, and many community service organizations.

In 2004 Dr. Fitzpatrick was the recipient of the National League for Nursing’s Award for Outstanding Leadership in Nursing Education. She has also been the recipient of a World Health Organization Fellowship for Study in Scandinavia and the United Kingdom and a Malone Fellowship from the Committee on U.S. Arab Relations.

To paraphrase the Reverend Peter M. Donohue, OSA, President of Villanova in his tribute to Dr. Fitzpatrick, “ . . . she epitomized the . . . nursing profession, she embodied the spirit of what it means to be a nurse—competent and compassionate, fully committed to bettering the lives of patients and the community at large. She loved nursing, the College, and her students. . . “

Under her leadership, the College of Nursing developed into a premier nursing program, recognized repeatedly by the National League for Nursing (NLN) as a Center of Excellence in Nursing Education. She expanded the College’s academic programs, including initiating the master’s and doctoral programs, as well as an accelerated BSN program for second-degree students. Dr. Fitzpatrick developed distance learning strategies and clinical simulation initiatives with a focus on scholarship and research. During her tenure, three centers were established: the Center for Nursing Research, the Center for Global and Public Health, and the MacDonald Center for Obesity Prevention and Education.